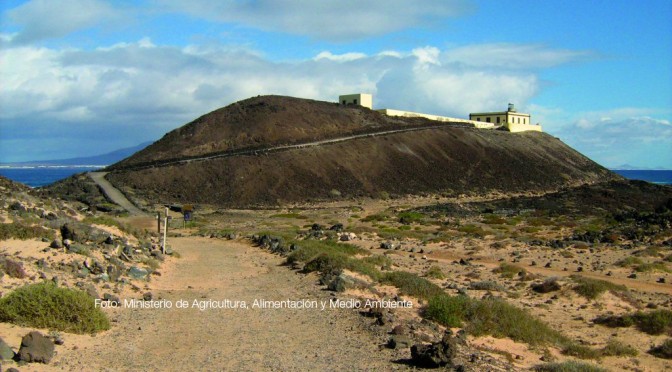 The lighthouse has always been an essential element for men’s life, has allowed them to develop and make progress towards new discoveries, even nowadays it keeps being a great reference point for sailors.

If many people know Alexandria Lighthouse, The Colossus or The Tower of Hercules, here in The Canary Islands there is one lighthouse which stands out particularly: Martiño’s Lighthouse, also known as Lobo’s lighthouse, which we can see everyday in our boat trips from Corralejo.

It stands out for many reasons: how long it took to build it, five years, due to several difficulties that arose, such as the transport of building materials carried first by camels, then by ships and in the third place by indigenous donkeys found in the very islet of Lobos; or maybe because of the nature of the islet, totally uninhabited, reason why they also had to build houses, underground cisterns, paths and yards so that the engineers, builders and the rest of workers could live for as long as the lighthouse works lasted.

Martiño’s Lighthouse started to be built in 1860, after the General Lighting Plan for the Canary Island was passed, and up to now this is the only Official building existing in Lobos. It very much looks like the lighthouses in Pechiguera and the island of Alegranza, in Lanzarote, because the three of them were planned by the same engineer, the renowned Juan León y Castillo, born in Gran Canaria.

The final outcome was a lighthouse with neoclassical style, white and yellow, 29m above sea-level. Besides the cylindrical-conical tower of the lighthouse, which is 6m. high, there is a one-storey building attached, which at the beginning was Juan León y Castillo’s occasional residence, when he visited the islet to supervise the project and later on it would be the lighthouse-keeper and his family’s residence. A cistern for the lighthouse itself was also built, located under the lighthouse, and it stored rainwater coming from the rooftop terrace to ensure water supply.

The lighthouse was first lit in 1865, a sixth class lighthouse registered in nautical charts with the international number D-2786. The main function it fulfils is that of

lighting with beacons the passage of vessels through the Bocaina Strait separating Fuerteventura from Lanzarote, and forming a triangle with Tostón Lighthouse in El Cotillo and Pechiguera lighthouse in Lanzarote.

With Lobos and its Martiño’s Lighthouse more specifically several personalities are related, among them writers like Josefina Plá, daughter of the lighthouse keeper Leopoldo Plá, who was born in 1903 and was brought up in the very lighthouse although later on she would develop her career in Paraguay. Or José Rial, who was a lighthouse keeper in Lobos since 1913 and thirteen years later he would write a novel about the island and his experiences there. Another renowned person was Antonio Hernández Páez, also known as Antoñito “the lighthouse keeper”, who actually was the last one to develop this task from the year 1936 until 1968, and also the last one to inhabit this islet. Antoñito also set up a typical restaurant there, at present run by his descendants and where you can taste fresh fish and delicious “paella” as an extra activity to be added to our trips from Corralejo.

So, it’s highly recommendable to visit Lobos and its lighthouse because of its history and the natural charm of the islet. Moreover, the visitor who climbs up Martiño’s lighthouse will enjoy breathtaking views.