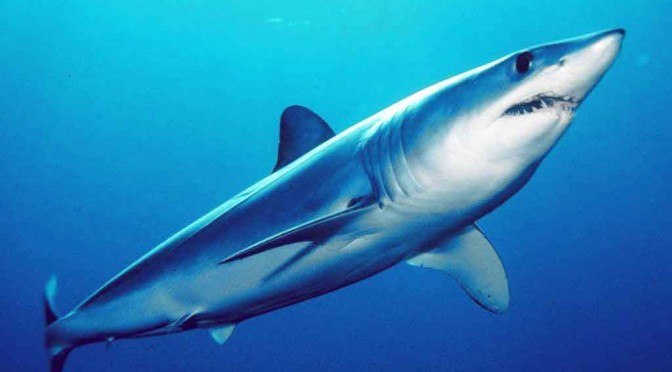 Among the inhabitants of the coast of Fuerteventura we have a species of exceptional shark: the mako shark (Isurus oxyrinchus), known in the islands as “Janequin”. It belongs to the same family as the white shark, but it’s smaller and it tends to live further away from coastal waters.

It is a migratory fish that can be found in our waters in spring and summer when the water is warmer.
This cartilaginous fish has a sturdy, solid and fusiform body, which provides its perfect hydrodynamics, allowing it to swim at high speeds that can exceed 90km / h. This is also due to the fact that it’s a warm-blooded species, keeping the same body temperature, regardless of the external one, which allows it to make sharp outbursts and big jumps, up to 3 ms high, since its muscle power triples and so does its ability to react. For this reason they are chased by sport fishermen, since they are very combative and powerful rivals.
It is an avid hunter that prefers the evening hours for its activity. It feeds on fish such as sardines, herring, mackerel, bonito, skipjacks … and other larger ones like tuna, swordfish, and even marlin and sailfish. It also eats squid, other sharks, sea turtles, dolphins and even small cetaceans. As a curiosity confirming its greed, it has even been found a 300 kg mako shark carrying a 55kg swordfish inside. Its only predator is the white shark, which fortunately does not frequent our waters, being too cold for it.
It is considered a dangerous species, although in The Canary Islands there are record of just a few attacks on people, and it usually inhabits the pelagic realm, although it sometimes approaches the coast in search of food. Still, we recommend extreme caution in case of meeting one, especially regarding spear fishing.
The Mako shark has two dorsal fins, one large fin and one smaller one,  and 5 gill slits on each side of the large u-shaped mouth; it has a pointed snout and sharp teeth. Its eyes are black, round and medium size.
He has a dark blue back, almost greyish, and white belly, and at the tip of the tail there is a crescent-shaped caudal fin, its upper lobe being slightly larger than the lower one, key for its perfect hydrodynamics.
They can be up to 400cm long (the female being larger than the male) and weigh up to 750kg; the size required to fish them is 290cm.
Mako sharks are ovoviviparous, female specimens being able to gestate up to 25 embryos, although litters are usually of 4-8 offspring, as the most developed ones eat their litter mates and the rest of eggs in an act of cannibalism called oophagy.
Regarding its commercialization, being such a big fish it’s sold in slices. Its fin is used to make soup, as well as its liver, from which oils rich in vitamin A and Omega 3 are also extracted. Its flesh is often mistaken with that of grouper and swordfish.

In our boat trips from Corralejo to the islet of Lobos, we go cross the area known as “The Mako” often visited by scuba divers, where it is sometimes possible to find some of these majestic specimens.

We invite you to discover the charms of our ocean on our catamaran.