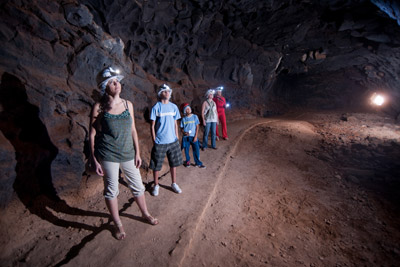 Just at a glance at Fuerteventura or Isla de Lobos, at their strange shapes, majestic cliffs eroded by the strength of the Atlantic, volcanoes that despite the passage of time still show us their craters, the wonderful “malpaís” that covers a great part of this land, … you can perceive the volcanic past of these islands. A history of strong eruptions that have reached our days offering us a different and spectacular landscape worthy of admiration. Fuerteventura island is the oldest one in the Canary Islands. In order to know many secrets of the past of this island we can visit “La Cueva del Llano”, a centre that allows us to delve into the depths of the earth, letting us know which animals inhabited the island  thousands of years ago.

What is “La Cueva del  Llano”?

It is a paleontological site located in the town of Villaverde, municipality of La Oliva, about 8 kilometres from Corralejo (headquarters for our excursions to Isla de Lobos) that was formed by the eruption of the mountain of Escanfraga 800.000 years ago. The eruption of this volcano caused a river of lava flows that solidified at the top by contact with air, while the bottom remained smooth, descending to the sea. Once this eruption was complete the result was an empty tunnel which forms a volcanic pipe which is up to 12 meters wide and up to 5 metres high at the highest parts, it even reaches 7 metres at some point. The surveyed length so far is 648 meters though the last 200 are difficult to scan. An open book on the past

This lava tube is an open book on the past of this land as “La Cueva” has worked as a drain of water in the area; due to the collapse of part of its roof, “El Jameo” was formed,  which gives access to it and through which streams of water and mud have slipped for centuries, sweeping sediments of the different stages and remains of fossilized animals which still remain there. Its walls, despite the passage of time, still retain the traces of this mud; as a result, the scientific community has bioclimatic samples to investigate the past of this island.  “La Cueva del Llano” is today an interpretation centre whose visit allows us to dive deeper into this lava tube tunnel walking a few meters, a guided tour on the soils of this island, where you will discover its richness. Before diving into the depths of the cave, visitors can discover the geological variety of Fuerteventura in the interpretation centre. This tube has an inhabitant of exception: the harvestman arachnid (Maiorerus randoi), similar to the spider, but yellowish, and unique to “La Cueva del Llano”, being the only cavity in Fuerteventura with appropriate environmental conditions; this is one of the most extraordinary species of invertebrate in the fauna of The Canary Islands. It is a small arachnid adapted to living in the darkness of the cave, so it is almost transparent as it has lost pigmentation and sight due to the darkness; therefore it uses two front legs as sticks to feel its way. It is believed that the ancestors of this arachnid arrived in the Canary Islands in wetter times, millions of years ago, living on the surface, and due to climate change it sought refuge in the cave where it found an ideal habitat. This Interpretation Centre is a monument of nature. An exceptional place to know and understand the evolution of the climate in Fuerteventura. It is also the oldest lava tube in the Canary Islands and probably one of the best preserved. Today it reopens Wednesday and Thursday, 10-15 hours. Saturdays from 15-18 hours to delight those who want to know more about the majestic volcanic past of these islands.

Therefore besides recommending the visit to Isla de Lobos on one of our trips from Corralejo, to enjoy the beauty of this volcanic landscape that  Lobos preserves even dramatically wild and natural, we recommend visiting the depths of Fuerteventura to understand and learn first hand the history of these islands.