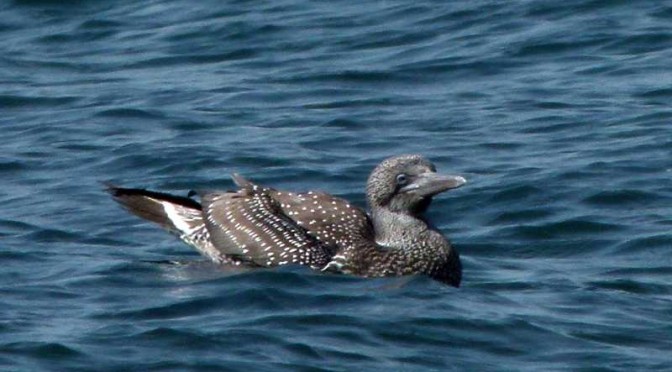 These days we are enjoying our trips to Lobos Island from  Corralejo’s Pier (Fuerteventura) in the pleasant company of one of the largest birds in the Atlantic, the gannet, which is in the process of migration in search of warm weather to spend the winter. Let’s look at them more closely.

The gannet, with a large wingspan, reaching up to 2 meters,  is a true master of diving,  able to dive into the sea, like a projectile, to catch prey (average size fish) 30 to 40 meters away and at high speed (100km / h) . It is found on both coasts of the North Atlantic and spends most of the time at sea only coming ashore to nest on cliffs and islands of the North Atlantic.

Adult birds weigh between 3 and 4 kilos. They have long narrow wings, with average wingspan of 1.80 meters and about 1 meter tall. Its plumage is white, with dark edges. They have a pointed and slightly curved beak.

Young pelicans are distinguished by the grey colour with white specks of their plumage. Because of the way they fish, diving into the water at high speed, they lack nostrils but they do have side nasal holes that can close when in the water; They have characteristic notches  in the corners of their mouth, through which they breathe.

To cushion the impact of their dives, they have a pneumatic bag system under their skin (air bags under the skin of their face and chest, which protect them when they plunge into the water) acting as a buffer, their plumage becoming very compact.
To withstand the high temperatures they have a layer of subcutaneous fat and dense and overlapping feathers.
The colonies are very noisy, since these birds emit a characteristic cry when they approach although they are silent on the open sea. They emit guttural sounds of short syllables: ghaghag-hoghog. In summer gannets nest on the shores of the North Atlantic (located mainly in the British Isles and Scandinavia). They gather in colonies of up to 20,000 couples where they make their nests very close together, with algae and marine plants.
It is when they are about 4 years old that they start breeding, laying a single blue-white egg which will be incubated for about 45 days. Both parents incubate the egg alternating periods of 24 hours, taking turns with a very peculiar ceremony, a greeting ceremony among parents.
The hatched chicks are fed by their parents for about 12 weeks, born naked and dark, and after some days their white feathers start to appear and they stop needing parental warmth. These chicks leave the nest and jump into the sea without being fully prepared to fly but with a good layer of grease (1 kilo more than their parents) that provides the heat they need while they remain floating for about 10 days until they finally begin performing their first flights and fishing.
They have aggressive behaviour in the nest, although the fights only take place among birds of the same sex. A female will only fiercely defend the nest from another female;  if  a female approaches the nest of another male, the latter grabs her by the neck and ejects her from there. The struggles between males occupying a nest for the first time can become quite intense. The fights are preceded by threatening gestures and males show their neighbours the property of a nest by gesturing with their head and beak facing down and erecting their wings.
Males are the ones that look for a place to breed and try to attract a single female, about 4 or 5 years old,  flying over the colony several times before landing and showing the male,  by stretching their neck, that they allow for the wooing; the males answer by shaking their head with closed wings.
Although couples separate after the breeding, they rejoin the following year, they are monogamous, breeding together their whole lives or for many years.

When winter comes, at the end of the breeding season,  they travel south, they undertake the post-nuptial migration that will take them to the Gulf of Guinea. In Spain it is a common species during migration although they don’t nest here.

Currently the gannet is listed as “least-concern species”, as it has a very wide distribution area and the number of individuals is large enough and the demographic trend seems to be increasing.

Remain attentive to this time in Fuerteventura, as you may be lucky enough to come across one of these specimens and enjoy their peculiar way of fishing, a real show. We keep enjoying their company these days in our daily trips to Lobos Island.