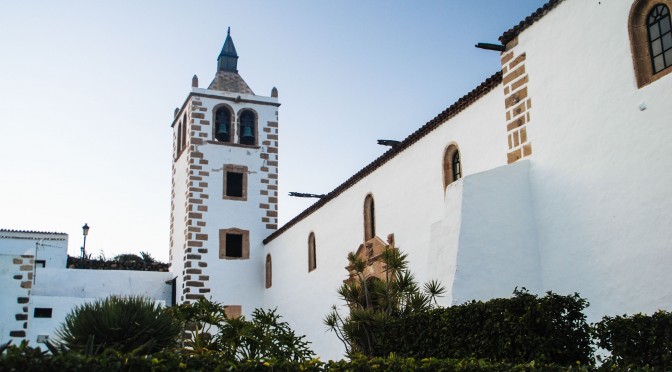 In our eagerness to make the wonders of this paradise, Fuerteventura,  known we can not ignore the oldest town in this island, and although our main passions are the sea and the boat trips around here, we recommend a visit to this town in the central area of the island:  Betancuria. Let’s get closer to the history of this island and specifically to this town, going back to the years of the conquest.

In 1402 Fuerteventura was invaded by the French nobleman Jean de Bethencourt (Norman from origin, he got in touch with the Castilian crown through a relative and he got the right to conquer the islands). However it wasn’t until two years later that Fuerteventura was finally conquered. In 1404 colonization starts properly; with this purpose a capital was founded by the military man Gadifer de la Salle —who accompanied Jean de Bethencourt in the conquest— and by Bethencourt himself, whose figure would be honoured when the capital was named after him: Betancuria, placed in one of the most fertile areas inland —a green valley, sheltered from the winds— less vulnerable and more sheltered from the frequent pirate attacks the island’s coasts used to suffer.

This place had been one of the first settlements in this island, when their inhabitants were the Guanches.

From its foundation it became a capital and the governing centre of this island, and all the administrative and governing organisms of this island were historically settled there.

Betancuria kept its political and administrative importance for centuries, resisting several attempts of Berber invasions that devastated the capital in the middle of the XVI C. However, at the beginning of the XIX C its economical power was decreasing in favour of other populations that were quickly growing, such was the case of La Oliva and Pájara, until it became one of the less populated urban areas in Fuerteventura. At the beginning of the XVIII C the military government moves to La Oliva, which meant the beginning of the end of the political monopoly that Betancuria enjoyed. But it wasn’t until the XIX C that economical, social, administrative, religious and political changes —due to the fall of the Old Regime and the economic boom of the eastern side of the island— weaken Betancuria’s power in favour of other urban centres like Pájara, La Oliva, Antigua or Puerto de Cabras (Puerto del Rosario nowadays).

In 1834 the municipality of Puerto de Cabras is set up, independent from Tetir, and little by little the different institutions of the administration and the government get settled there, thus becoming the capital in 1860.

Nowadays Betancuria, with less than 700 inhabitants, is a touristic attraction because of its beauty, as it keeps being one of the most beautiful villages in this island, whose historical power is still reflected in some of its buildings.

It’s one of the main buildings in this historical capital that started to be built during the first years of the founding of Betancuria to cover the spiritual needs of the islanders. (The 10% of the agricultural production was given to the church, and the 20%, to the island’s governor). This Norman-gothic style Church-Cathedral suffered some Berber attacks and had to be rebuilt in the XVII C., though it still keeps some remains of the first church, like the belfry and some columns and, also worth mentioning, its baptistery, choir, and a Mudejar coffered ceiling.

The Hermitage of San Diego

Another characteristic feature of Betancuria is its hermitage, similar —regarding the stone and the whitewashing— to the cathedral. Beside it we find the remains of the Franciscan convent that together with the hermitage were originally a part of the first Franciscan convent founded in the Canary Islands.

We recommend a visit to the ancient capital of the island: in its streets, besides breathing the spirit of the conquest and the history of Fuerteventura, you will find local crafts, restaurants with typical majorero dishes … and enjoy one of the areas with the most vegetation in this desert paradise; as mentioned in the first paragraph, before knowing the  inland area, we highly recommend this boat trip from Corralejo, in which we are true professionals, where we’ll show you the experience of enjoying the sea and one of the wonders and most beautiful natural monuments  of this Canarian archipelago,  Lobos Islet. We’ll be waiting for you…