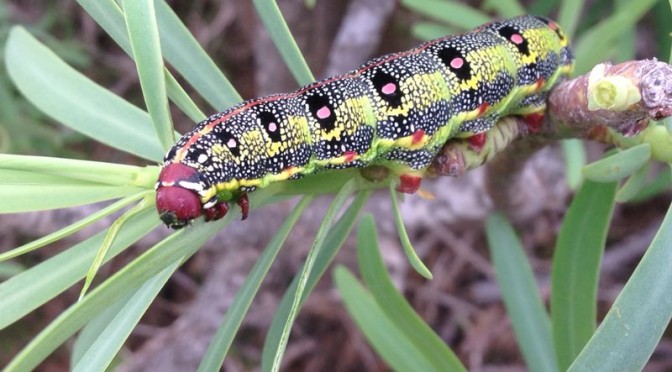 The Sphinx of Tabaibas (Hyles euphorbiae tithymali) belongs to the nocturnal lepidoptera (moth) endemic to the Canary Islands. It represents one of the 1,200 families that make up the order of the Sphingidae, and within the wildlife of Fuerteventura, despite not being one of its most extended inhabitants, its showy colourful body draws attention.

The name Sphinx of Tabaibas comes because their caterpillar lives precisely on these plants, both sweet Tabaiba (Euphorbia regis-jubae), and bitter Tabaiba (Euphorbia obtusifolia), which also serve as food for this herbivorous species that certainly prefers the tender tips and flowers, which they can devour in a few seconds.

Tabaibas venom is completely harmless to the caterpillar; on the contrary, it serves as biological ally, and it accumulates this venom in its body and keeps it even when the caterpillar becomes a moth, creating an unpleasant bitter taste in its predators, which will not try it in their life their again. Besides, they are able to regurgitate this poison, fluorescent green, when they feel attacked.

As a defence against its predators, mostly birds, it also has some spectacular electric colours throughout its entire body, with green, yellow and blue stripes, some black patterns shaped as eyes and a red spot on its head (the red, yellow and black are usually warning colours in nature). These colours that serve as defence, also turn it into one of the most showy species in the island, providing it an exotic attraction.

They are most commonly found from June to September, and a place where it’s most awesome to find it is in the Natural Park of the Dunes in Corralejo, where it leaves small marks on the golden sand, when moving between Tabaibas (simulating traces of tiny bikes ).

The adults of this species of fauna in Fuerteventura have nocturnal and crepuscular habits, hence it’s not easily to meet them, but sometimes they can be seen in daylight, especially those younger individuals.

They may be found in spring, making up showy groups on the leaves of the plants that will host them.

The size of the adult caterpillar can reach up to 15cm and, when it has run its course, it goes down from the Tabaibas and buries itself in the sand to start the chrysalis stage and become a pupa, which in turn will become a moth, not as beautiful and showy as the caterpillar, but large, with a wingspan of between 5’4 and 7 cms, which tuns it into one of the species of moths which best fly. Their wings move so fast that its fluttering produces a whistle like the one produced by the drone.

The colour ceases to be attractive to become a dark brown with some white patterns, although there are some species whose moth is black.

It features the longest proboscis of all moths; It is the organ that serves it as a drinking straw to suck nectar from tubular flowers. When it is not used, it’s rolled up under its head.

At the end of its life, the female moth lays about 8-10 greenish eggs, each of them becoming a showy caterpillar later on, thus starting the cycle of the species again.

If you  happen to find any of these caterpillars on your way, don’t be afraid of them, but don’t bother them either  if you do not want them to spit on you the Tabaibas’ venom. Just watch the wonder of nature, which is able to create such wonderful specimens.