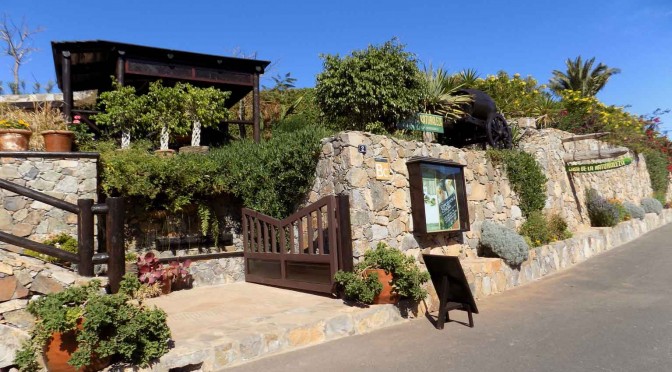 Just one week ago  the House of Nature opened in the town of Vega de Rio Palmas,, a space dedicated to the exhibition of fauna and flora wonders in the Natural Park of Betancuria in Fuerteventura.

This house, built on the ruins of an ancient majorera house, is owned by the German Reiner Loos, who has been living in Fuerteventura for 20 years, and has managed to give a touch of fantasy to this place, raising a rustic-style building with lots of vegetation and gardens, and with a restaurant for visitors to rest, if they come from the path SL FV 27 (Barranco de las Penitas-Vega de Rio Palmas), enjoying the majestic views of Betancuria mountains. In this House of Nature you find a really modern exhibition hall, where visitors can discover some of the unique fauna and flora in the Natural Park of Betancuria.

This park became a National Park in 1987, and in 1994 it also became a Rural Park, the “Natural Monument of Ajuy”being then included in their confines.  It is also a ZEPA  area (Special Protection Area for birds).

The Park includes the area in the west-central sector of the island, covering an area of ​​16,544.3 hectares in the municipalities of Betancuria, Antigua, Puerto del Rosario, Pájara and Tuineje (as you can see in the picture below). This area corresponds to the basal outcrop in Fuerteventura, and it also presents sub-aerial volcanic series, so the colour and structural peculiarities of this area are stunning. There are moderate mounds that intermingle with U-shaped deep ravines. The most prominent peaks of this massif are Morro Jana (764 m), Gran Montaña (708 m), Morro de la Cruz (676 m) and Morro Velosa (669 m), major mountains considering the island scenario.

The existence of mountains and canyons are participant of the great variety of vegetation that exists, many of these rock plants being considered as endangered and protected species.

You can find there endemic species from Fuerteventura , but also from The Canary Islands and the whole of Macaronesia. In lower areas we find a blanket of sparse grass, with few trees and many shrubs, mainly sweet spurge (Euphorbia balsamifera), “cuernúa” (Caralluma buchardii), “ jorjao” (Nauplius asteriscus seiceus), gorse (Launaea arborescens is given ), the cactus (Euphorbia canariensis) and “salados” (Sarcocornia perennis). In ravine funds there are tamarisks (Tamarix canariensis and T. africanus), palm trees (Phoenix canariensis), reeds, rushes, etc. Among the introduced species the mime (Nicotiana glauca) stands out, as well as  the population of pine trees known as “Pinar de Betancuria”. The same can be said about its wildlife, with great variety, especially on humid ravines and inland areas, where you can find native birds such as the  majorero vulture (Neophron percnopterus majorensis), the tit (Parus caeruleus degener) and the canary (Serinus canaria), and other migratory birds such as the marbled teal (Marmaronetta angustirostris) and the Ruddy Shelduck (Tadorna ferruginea). The habitat that stands out is not only the mountain, but also The wetland in the dam of Las Peñitas , Los Molinos, and the coastal cliffs are of great importance. In these cliffs, specifically in the town and Ajuy, you can find important deposits of ancient remains, with ocean sediments and fossils of already extinguished marine animals. The waters in this part of the coast are inhabited by species such as the whale shark, sea turtle, swordfish, sparidae, whales, rays… In the House of Nature, visitors can enjoy an exhibition with photos, videos and information on these species of the Flora and Fauna in the Natural Park of Betancuria, besides a projection room where a multi-screen film is exhibited, which portrays the island in all four seasons.

Part of the exhibition hall is dedicated to ecological disasters that produced tar in the Galician coast (Prestige) as a protest to this industry and a rejection of the implementation of these platforms on the shores of our paradise.