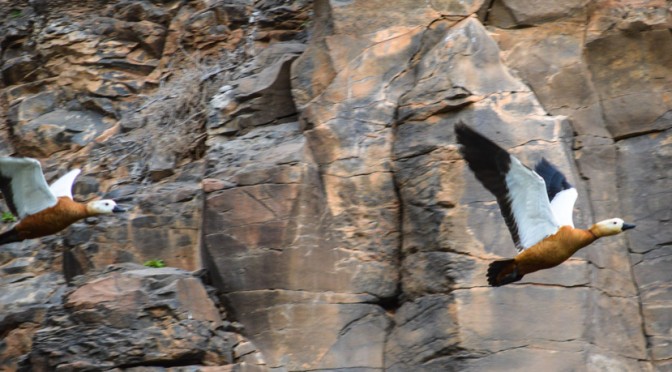 As you know every day we depart from Corralejo pier for our catamaran excursion to Isla de Lobos, a magnificent tour in which  we don’t only enjoy the wonders of the sea but also of the wonders of the sky, since they are many the birds flying over us in this beautiful island of Fuerteventura.

For several months we have been lucky to see, more and more often, some birds that look like geese; they even honk like them and we usually see them in couple. This is the Ruddy Shelduck or Tadorna ferruginea, which is a species of bird from the Anatidae family, fairly widespread in Asia and North Africa. We can boast of  Fuerteventura currently having the largest population of Ruddy Shelduck in Spain. Although in the past they used to spend the winter in the peninsula and sometimes nest in Andalusia, they currently nest exclusively on our island.

As we have already discussed, The Ruddy Shelduck looks like the goose, with long neck and legs. Its head is cream whereas its tail is black with black wings except  at the front, which is white above and below; its body is reddish tan. The male has a narrow black necklace and the female stands out  because its face mask is more prominent.
Where do they live? In Fuerteventura they live in the wetlands and the ponds inland, these shallow waters being their favourite breeding areas, so they can graze on their edges. It is really common to see couples in the ponds in Los Molinos, Catalina Garcia (Tuineje), and La Rosa del Taro (Puerto del Rosario) … these wetlands have become nurseries for the raising of chickens after the breeding season, which started between January and February.

They feed on stems and  alfalfa sprouts, seeds and typical dry-land insects, as well as worms in wetter soils. They usually eat at dusk and dawn.

They usually lay between 8 and 10 eggs which are incubated by the female about 28 days, while the male defends and doesn’t go too far  away. They lay an egg per day and they begin to incubate them once the clutch has finished. When they are born they are able to feed rapidly ; even so, the couple still protects them and devotes about 55 days of care, until they can fend for themselves. The first couple to arrive  in Fuerteventura was in year 94 and experts believe they did  in a natural way; currently we are believed to have a population of over 300 specimens. Although it is a migratory species and there were periods in which they totally disappeared from the island, probably because they went to the wetlands in North Africa, it is now common to see them throughout the year, probably because this island is not very crowded and has wetlands similar to the African ones.  Surely this year is more common to see them and its population has grown as this autumn has been rich in water.

Despite boasting of population we must not forget that men and their lifestyle are a major threat to this species as they are responsible for the destruction of their habitat and, specifically in Fuerteventura, the extraction of water from ponds for irrigation. Also poaching and the plundering of nests are circumstances that threaten this species.

The Ruddy Shelduck is included in “El libro Rojo de las Aves de España” as “critically endangered species”  and it is listed in the category “Of special interest” in “El Catálogo Nacional de Especies Amenazadas”. From FuerteCharter we’ll keep enjoying these couples we see from our catamaran in our daily excursions from Corralejo to the wild and unspoiled islet of Lobos.