In this adventure we have embarked, wanting to show the world the wonder of living in a paradise such as Fuerteventura, we feel compelled to talk about all those animal species that accompany us day after day in our boat trips around this area of the Atlantic.

In this occasion, to open this section about birds in Fuerteventura, we want to talk about the Cory’s Shearwater, which flies around our ships and makes its nest —to  breed— in one of our favourite tourist destinations, the island of Lobos.
Shearwaters are pelagic sea birds, which only leave the open sea in order to nest and breed. Their habitat, so, is the sea and they fly long distances to forage, picking up food from the sea surface while flying.

The Cory’s Shearwater, typical of our islands, owes its name to its grey ash feathers. It flies and fishes in flocks, and it flies very well in strong winds. It’s able to cross the Atlantic and go back every year to the same breeding sites.
They are average size birds (40-45 cms), with long wings, and they can naturally live up to 30 years.

The Canry Islands, a breeding site.
Most part of the population of the Cory’s Shearwater is found in the Canary Islands, more than 30.000 couples, followed by the Balearic Islands, Chafarinas Islands and other Mediterranean islets.
They only come to land, the coast, in order to breed, and when they get to their nests, near their breeding area, they make very characteristic guttural and nasal sounds. In Fuerteventura it’s typical, in light-poor coastal areas, to hear the cawing of the Cory’s Shearwater coming near the coast, and they receive the answer from the ones that are already there. That way they announce their arrival in a very noisy way. Furthermore, when they come to land in order to breed, they wait for the night so as to easily go unnoticed.

Breeding
They approach our coasts in March, in flocks from 300 to 400 specimens, a moment of really intense social activity in sea-bird breeding colonies. For this purpose they approach mainly islands and islets, although they also approach coastal cliffs.  They use natural hollows (caves, nest-holes, cracks…), or they just dig them, using lush bushes and rocks as shelter. It’s copulation time and it will be in May that their eggs will be laid.

Offspring
They lay just one egg a year, which is never re-laid in case they lose it. Just half of the Cory’s Shearwaters starting to breed manage to fledge their offspring. The responsibility of egg incubation falls as much to the male as to the female bird, just one of them leaves the nest in order to bring food to their partner, which can stay from 3 to 9 days in the nest protecting the egg. The synchrony in the couple must be perfect, and so it must remain until the end of the breeding season.

At the end of July the hatching takes place. The grey ash breeding chicken will never be alone in its nest-hole, one of its parents will always be beside it while the other goes foraging for the family. The adults feed their chicken with Iberian nases, squids and mackerels caught in the open sea and which they carry in their crop to the nest, already partially digested.
After being fed by their parents for 50 days, the chickens start to fly and try to get their own food on the surface of the huge ocean. They instinctively leave the coast in the middle of the night to make for the sea, though not all of them achieve their goal, as many of them are disorientated by light pollution.
For many years now, the coastal villages in Fuerteventura have been switching off their lights to help these young Cory’s Shearwaters so protected by their parents to reach the open sea.
In December, the breading season finishes, they start to migrate and it won’t be until February the following year that they will return to their nests to start breeding again. The young birds won’t go back to their birth places until reaching their sexual maturity, from two to nine years later. The birds that have been bred in the Atlantic Coast spread all over the coasts of Western Africa until South Africa.

If you are coming to Fuerteventura or you are one resident of this part of Macaronesia, don’t forget to listen to the Cory’s Shearwater’s cawing, look for them when travelling to Lobos with our boat trips, it’s one of those shows that nature gives us. 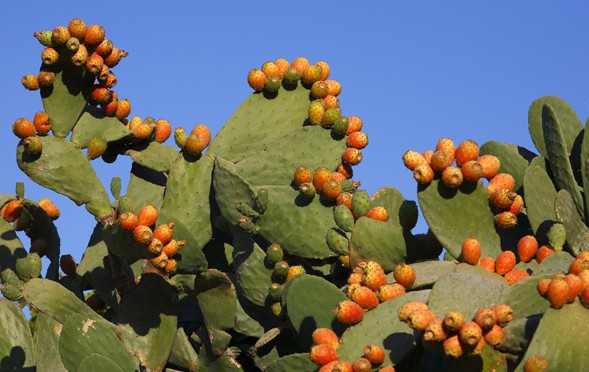 Fuerteventura’s landscape is distinguished by its desert expanse. Kilometres of land that are presented to the eye and as endless plains where the sight gets lost, interrupted by some hills, volcanoes, mountains and “malpaises”.

However, so much flat arid terrain is often dotted with cactus, painting of green the most curious corners on this island of the wind.

The prickle pear cactus, as Opuntia cactus are called in the Canaries, are shrubby plants belonging to the genus of cacti.

ORIGIN AND DISTRIBUTION
There are around 250 subspecies of Opuntias and they all come from America, although in Europe many of them have been naturalized and are considered invasive.

They can be distributed from sea level to 3000 meters high.

In the Canaries, the first non-American territory where they were grown, there are two of these subspecies considered invasive and they have been naturalized on islands

The other subspecies can be sometimes found scattered on the edges of roads or around detached houses.

MORPHOLOGY
The main feature of prickle pear cacti is growing in segments, called cladodes or “blades”, from which other cladodes sprout, as well as flowers, and also producing the delicious fruit: figs.

Cladodes have areolas, which are small lumps from which glochids arise, clusters of small thorns.

They can have very different sizes, from small bushes, shrubs or even treelike structure.

We will speak specifically about the invasive species in the Canary Islands (Opuntia ficus and Opuntia dillenii), which are those that give us such delicious fruit: the so called “higo pico”, “higo picón” or “tuno”, and which are also responsible for the large number of cochineal which introduced The Canary Islands into the dye industry, as these insects, dried and used to produce carmine dye, abundantly proliferate in the prickle pear cactus.

OPUNTIA FICUS
This subspecies is known as “tunera común” and it features “blades” between 30 and 50cm, with not many little thorns. Adult “blades” may even not have thorns at all. Typically they reach 3-4 meters high.

OPUNTIA DILLENII
Also known as Indian “tunera/penca” or “ink”. It features “blades” which are smaller than that of the “tunera común”, between 20 and 30 cm. The areolas have between 6 and 8 strong yellow thorns. They usually reach 2 meters high and the fruit pulp is typically red. It isn’t usual to find it above 300m of altitude, so it predominates in the coastal area. TIPS TO CATCH PRICKLE PEARS WITHOUT PRICKLING ONE’S FINGERS
It is recommended catch “tunos” upwind, to prevent it from thrusting the thorns towards us. Also, using tongs and, once caught, throwing them to the ground and sweep them, or rubbing them against other resinous plant, so that thorns stick together. Hence it is advisable to put them under running water to remove any remaining thorns.