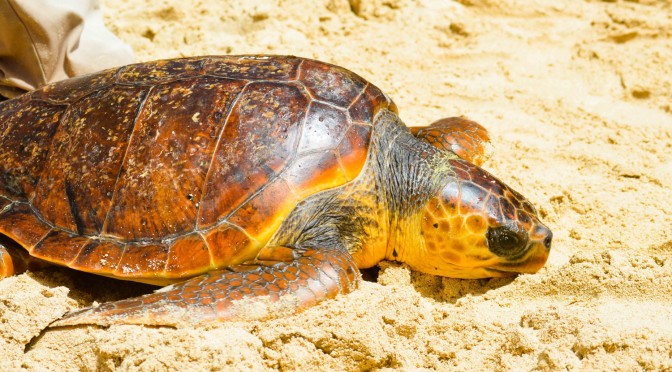 Some weeks ago we were talking about the beautiful specimens of Loggerhead Turtle that very often liven up our trips in Fuerteventura and we also commented on the existence in our island of an ambitious project aiming to bring back this specimen into the Canary Islands, which disappeared from our coasts 300 years ago, The Turtle Project. The Island Council of Fuerteventura, the Environment Department, the Biosphere Reserve and a group of volunteers have been working on this project, which has two basic lines of action, from 2006.

Some data confirm that sea turtles bred some years ago in Majorera coasts, but we suppose that the strong pressure exerted by the man on the coast made this species stop coming to lay their eggs here.
The Turtle Project intends to reintroduce the Loggerhead Turtle in the Canary Islands, more specifically in Fuerteventura, aiming to settle again a population of this species that, over time, will breed on the beaches of the Archipelago. With this purpose, they are requesting Cape Verde to give them a population of these turtles. The beach of Cofete has been considered, for several reasons, as the perfect site for the development of this project.  In Cape Verde, in the island of Boa Vista, they have been studying the population of Loggerhead Turtles for several years, and one of the results of this study is that these turtles don’t always breed in the right place, and because of that, in some occasions the 80% of the eggs can be lost. It is precisely these eggs that Cape Verde is giving this project, trying not to jeopardise the population they have in that Archipelago.
Two turtle nurseries were set up in Fuerteventura, one in Playa de Cofete and another one in Morro Jable. The eggs were placed in Cofete and the first hatching was a complete success, which turns Cofete into an ideal habitat for the development of nests.

Once the eggs have hatched the new born turtles are moved to the nursery in Morro Jable, known as Cape Verdean  “Sodade” (homesickness). In this place the little turtles are looked after and fed — about approximately one year— with the aim of their reaching the necessary development to release them, increasing their possibilities of getting ahead once they are free, as newborn turtles are really vulnerable. After the first year it’s time to release them.
The Loggerhead Turtle is characterised for always breeding on the same beach they were born, so it’s expected that fifteen years later, when they reach their maturity, they will come back and breed on Cofete beach, witness of their creation.  This is the aim of the project, as if these turtles breed on our coasts they will repopulate the archipelago over the years. But in order to achieve a complete success of this ambitious project our cooperation is necessary, not just the one from institutions.  As we said in our previous article, this is a slow reproductive rate species, as not only do the females reach their sexual maturity between the age of 15 and 33 but they only lay eggs every two or three years. Moreover, once the eggs hatch very few of them become adults.  For this reason, adding to the scarcity of beaches to nest the fact that many specimens die tangled in fishing nets, asphyxiated in the trawls, trapped in plastics waste… it’s considered that The Loggerhead Turtle is an endangered species.
Although we haven’t been able to move out eggs from The Cape Verde to Fuerteventura for some years, the Island council states that the hatching of eggs on Cofete beach is about to start again, thus aiming to increase the possibilities of success of this project.

Within the Turtle Project there is a second line of action: that of recovering and healing injured turtles, where institutions as well as a group of volunteers who have invested their time in this project are working on the reintroduction of these turtles. It’s necessary that all of us contribute to this recovery, alert on seeing an injured turtle so it can be rescued, healed and release again into the sea… Just today we have had the chance to witness how a young specimen of Loggerhead Turtle, after having been recovered and healed, has been released in Grandes Playas, Corralejo, by environmental agents —landscape that we enjoy in our trips in Fuerteventura—. We leave you with the pictures we have taken of this beautiful turtle and we encourage you to be alert and contribute to this ambitious project…

We also encourage you to enjoy the sea and, hopefully, in the company of these turtles; we can assure than on countless occasions in our trips in Fuerteventura you can see them float on the surface in order to take the sun they need to increase their body temperature as they, as reptiles, must thermoregulate.