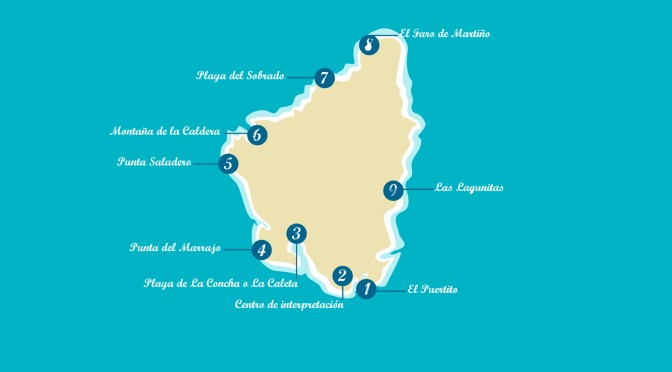 Just 2km away from Corralejo, the islet of Lobos —which we visit daily in our boat trips—, presents a series of attractions well worth to bear in mind in our holidays.

To make it easy, in Fuertecharter we show you this short guide with the main spots to visit in the islet.

If you have a look at the presented diagram, number 1 is “el Puertito”, no doubt, for many, the most spectacular site in the islet, due to its full of life turquoise water — letting us see a sandy bottom typical of heavenly beaches— and to the big amount of big and small rocks that are shown by the low tide, making the landscape change considerably.

In “El Puertito” we find the only human settlements in the islet, crowded in summer but almost uninhabited in winter, and we also find the only restaurant in this islet, where you can eat fresh fish and “paella” every day.

The next tourist attraction is the “Centro de Interpretación”, a wooden building where the visitors can find big informative panels about the history of Lobos islet, its landscapes, flora and fauna… and where we can also see a scale model of the islet, which will allow you to get an overall idea of the islet’s orography.

Then we find “ La playa de La Concha” — called like this after its shape— also known as “La Calera”, as rhodolites were obtained in the past from this beach, calcareous structures of weeds that were used in the lime kiln, near the beach, to get lime to build Martiño lighthouse. This beach seduces all those who tread on its sand with the quietness of its crystal clear waters. This is a little bay closed by a stone and pebble barrier, which acts as a shield against the waves and turns it into a pool which is ideal to have relaxing baths.

Near this beach the visitor will find an unfinished salt mine, an initiative by Andrés B. Zala, neighbour from Corralejo, who tried to obtain salt to preserve fish until they could take it to Corralejo.

“Las Puntas del Marrajo y Saladero” are protrusions that act as breakers for what many consider to be the best waves in Fuerteventura. The wave emerging in “Saladero” is known as “Derecha de Lobos”,an internationally renowned wave which year after year attracts hundreds of tourist to our island. The wave in “Majarro” is also a long and noble right, much easier to reach for less experienced surfers.

The next outstanding point in the map is “La montaña de la Caldera” whose outline is very representative in the islet of Lobos. This mountain is a volcanic cone that belongs to Bayuyo alignment, of which we spoke in a previous article in our blog. It is 127m high (with impressive views of Lanzarote and Fuerteventura from its summit) and it’s half submerged, housing within it a black sand beach: La Caleta. Towards the wind direction, on the inner side of the caldera, there is a colony of yellow-legged seagulls, and on its most unreachable slopes shearwaters and petrels nest.

The next spot is “La playa del Sobrao”, and following the path we get to “El Faro de Martiño”, emblematic sea building to which we have also devoted an article you can also read by clicking on the following link. Under this building the traveller can find a small salt marsh called “La lagunita del faro” , created by the interaction of rain and sea water, and it’s characterized by a striking salt crust caused by quick evaporation, on which you can watch numerous birds like herons, curlews and turnstones.

And finally, the end of the track is marked by “Las Lagunitas”, with a very special ecosystem. It’s a hollow separated from the sea by a small sandbar whose bottom is relatively waterproofed by clay deposits. When the tide rises the sea water seeps through and creates lots of little ponds. Three species of plants define this ecosystem botanically: Limonium papilatum, Limonium tuberculatum (which have in Lobos their best populations) and Limonium ovalifolium canariense, a unique endemic species in Lobos islet. This species is able to survive under the water, even in case of large tides.

Near “Las Lagunitas” we also find the biggest lime kiln in the islet, whose fuel was extracted from nearby fossil marine deposits which are rich in limestone.

In our boat trips from Corralejo we surround the whole Lobos islet, offering sights of all the track we have told you about, but from the sea. We invite you to discover this wonderful islet, both from the water and walking through it.