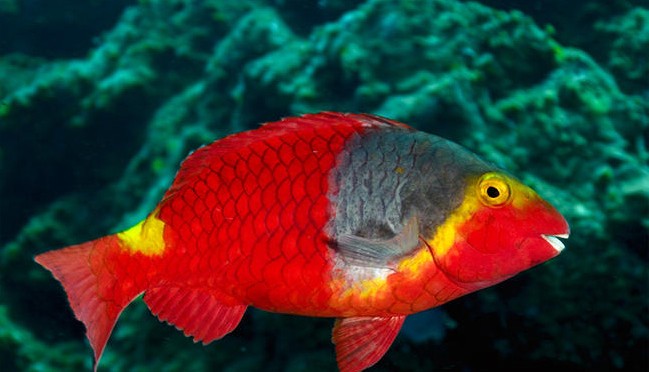 One of the most representative species of the marine fauna in Fuerteventura and its gastronomy is renowned Vieja (Cretan Sparisoma).

In our daily excursions to the neighbouring islet of Lobos the presence of this species cheers up the sea bottom with vivid and bright colours, red and yellow in the female.

The Cretan Sparisoma belongs to the superclass of gnathostomata vertebrates, fish that have a bony internal skeleton (bony fishes), made ​​up of many calcareous structures and few cartilaginous ones. Apart from its internal skeleton it also has flaky bones in its dermis, which is known as exoskeleton.

Its mouth is small and terminal, and it can make very precise movements, as it has articulated dermal bones, where their teeth grow, which are very strong but lack replacement when they fall or break. Its teeth are partially or completely fused, forming a pair of plates in each jaw,  in the shape of a parrot beak, which is why it’s so often called parrot fish.

It inhabits rocky bottoms, feeding on small crustaceans and invertebrates. It usually feeds by nibbling the bottom, introducing in its mouth even rock particles. Once in its stomach, this is responsible for separating the bits of rock from small crustaceans and invertebrates that are hidden in them, and then it ejects pieces of rock in the form of sand, so, it’s a fish that contributes to the formation the sandy bottom.

Its body is oval, with rounded front part and tapered head, and it’s a species that presents great colour differences between female and male specimens. While the male is brownish, the female has bright colours: red, indigo and yellow. Males can be up to 50 cm long.

Another characteristic feature of this species is that individuals can change sex, because of strategies developed throughout history to perpetuate the species. The art of fishing has its peculiarities and there is a large number of amateurs and professionals who are devoted to fishing only this species, and have a vast knowledge and wisdom about it. They name their rigging in a different way to the rest of fishermen, and they have a special fishing rod, with a very long and flexible tip, usually made with intelligence and with few means. Even the name they give to the low tides can change over that given by the rest of fishermen.

According to these men of the sea, “La vieja” is an intelligent fish that tests you and even laughs at you if you do not know how to fish it.” Good technique is necessary and not just cheat them by casting bait into the water. It’s very whimsical about the bait, and it only likes small rock crabs. In Fuerteventura it’s common to see fishermen at low tide, crouching to capture the delicacy that will help them get their trophies.

This type of fishing can be done either from shore or boat. In ancient times, fishing from barge required two sailors, one holding the oars and another one holding a fishing rod at the back, to jerk at the right time, as the other hand was busy holding the “mirafondos”: glass used to see how the fish approaches underwater. The sailors had their own sign language with their legs, as their hands were busy with fishing rods and rows, to communicate without words so as not to scare the wise fish. Thus, with their legs, the sailor wearing the “mirafondos” told the one rowing if he had to give paddling strokes and in which direction. Today fishing takes place in motor boats and the presence of two sailors per boat isn’t required. It’s either float fishing with rod and reel or with air fishing rod.

“La vieja” is also whimsical about its habitat, so it can be found both in the intertidal zone and on the coast, and tends to move from one place to another frequently.
According to the fishermen, the best time to catch them is at dawn, as “la vieja” always rests in the same place (roosts), and in the morning it wakes up hungry, and it is harder to refuse a delicious crab.