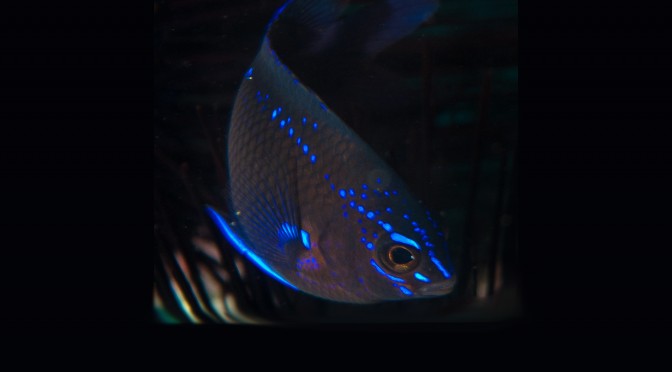 Despite its delicate and appealing appearance, marked by dark colours and gleaming electric blue lips, which makes it look like the harmeless fish in an aquarium, it is one of the most aggressive, territorial and unsociable species that exist in the oceans.

Habitat
This benthic species crosses the rocky sea beds, Cytoseira (algae) prairies and rocky areas in the Oriental Atlantic Ocean: Senegal, Cape Verde, Canary Islands, Azores and Madeira, always above 50m deep and more common less than 25m deep.
Its showy colouring and great ability to adjust to changing environments and abrupt changes of parameters, makes it a common fish in aquariums, where they can live up to 10 years in captivity, though, it is difficult to keep them in community aquariums, sharing space with other species, unless they have been introduced together while in their young stage. If a new Fula gets into an aquarium where there is already a group, the male leader, supported by the rest, will constantly attack it to death.

They quickly take control of the space they inhabit, confronting fishes even much bigger than themselves.

Behaviour
They are diurnal. They tend to move in fairly dense banks, dominated by the largest male. Males can also be found on their own or living with their breeding females.
A male can mate with several breeding females, spawning in summer (what is known as Spawn), in crevices or in nests composed of a group of several rocks, which the male will watch closely during the 3-day incubation period, even ready to kill another male approaching the egg laying area, less than 1 meter radio.
In the fighting, males increase their breathing rate, producing very distinctive sounds in combat; as they belong to teleost fish, which are those with specialized organs to emit sounds.

Morphology
Robust and compact body on their sides, covered with large visible scales, with short and fairly rigid fins. Their eyes and mouth are small and they have a small bulge on their head. They have sharp teeth in both jaws.
The colouring which young specimens feature, up to 3 years old, is very striking. They are almost black, with electric blue stripes that sometimes create whimsical patterns. From the age of 3 their color changes from black to grayish brown, excep in their head and the dorsal and caudal fins, which take a very dark blue colour. In the adult specimens the electric blue stripes condense on the edges of their fins and head.

They are usually 8 to10 cm long and males, slightly larger than females, can reach up to 15cm.
An oddity of this species is that there are specimens that are pale orange in the back of their body to the tail, a phenomenon whose cause is scientifically unknown.

Feeding
They feed mainly on small invertebrates found among the algae. The young fish are extremely sensitive to food, only eating marine plankton, so those which are bred in captivity tend not to survive unless they are given food of this type.