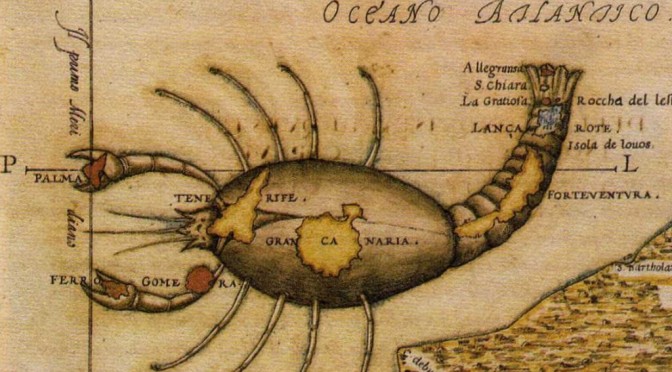 If you have visited the island of Fuerteventura, if you are going to visit it soon, or if you are one of its residents, but do not know the history of this Atlantic island thoroughly, here we leave some curiosities that you”ll surely like to know about both Fuerteventura and the Canary Islands as a whole.

THE CANARY ISLANDS ARE PART OF LA MACARONESIA AND MYTHOLOGICAL ATLANTIS
La Macaronesia is the set of five of the North Atlantic archipelagos: Azores, Canary Islands, Cape Verde, Madeira and the Savage Islands. It comes from the Greek word makárôn nêsoi, which means “happy or fortunate islands”, where it was assumed that deceased heroes of mythology would abide.
Macaronesian islands were never connected to the continent, as they are volcanic islands that emerged from marine eruptions, and according to mythology, it was thought that these islands were the summits of Atlantis (submerged continent), emerging to the surface. Atlantis, according to mythology, was the continent that Zeus sank in punishment for its inhabitants” bad behaviour.

ETYMOLOGY OF THE WPRD “CANARIAS”
These islands received its name because after the first expedition sent by the king of Mauritania to meet the ends of the ocean, beyond the Pillars of Hercules (Gibraltar), what they found when they reached these islands was a fierce breed of dogs (the Latin: can, canis), so the name the islands received was “Insula Canaria” (Isle of Dogs).

“EL GOFIO”
Energy food derived from some roasted and ground cereals such as wheat, rye, corn, barley … Its highly nutritious properties turned it into the staple food of this people for many years. This powder is often added to milk at breakfast, also to “el potaje canario”or kneaded , resulting into “la pellla de gofio”.

“MAJORERO” CHEESE DESIGNATION OF ORIGIN
“Majorero” goat cheese enjoys appellation of origin from the February 16th , 1996, and it can be made only with goat milk from the island or a mixture of up to 15% of Canarian sheep milk, before letting it age.
In the case of mature cheese it features the palm leaf on its bark, which is used in “empleitas” to make the mould that shapes it. The most famous ones are cured with gofio, paprika or oil, although other varieties are found.

THE SALT
In the early twentieth century, salt was one of the resources that allowed the islands to generate more revenue. The climate of the Canary Islands is ideal for the production of sea salt, which was exported all over the world, and which also was of great importance to preserve fish, when the phenomenon of freezing had not yet been discovered.

“COCHINILLA” WAS ALSO TRADED
The cochineal is a parasite insect of the cactus, from which a very bright red dye is obtained out of its blood , used in ancient times to dye fabrics. Until the mid-nineteenth century it was a precious commodity, as the high society’s garments were dyed with it. Eventually, much cheaper but less safe synthetic dyes were discovered.
This dye is used today as a food colouring (E-120) and in the pharmaceutical industry, and small productions are preserved on the island of Lanzarote and La Palma.

CANARIAN WRESTLING
This sport has a long history among the Canarian population, as it has been practised in the island since these were inhabited by “los Guanches” (ancient inhabitants).
It consists of unbalancing the opponent and making them touch the ground with any part of his body other than their sole.
It is played on sand enclosures called “Terreros”.

“EL TIMPLE”
Plucked string instrument, typical of the Canary Islands, of small dimensions (38-40cms) and due to its curved back, hump-like, it’s recognized as the ” resounding little Camel”.