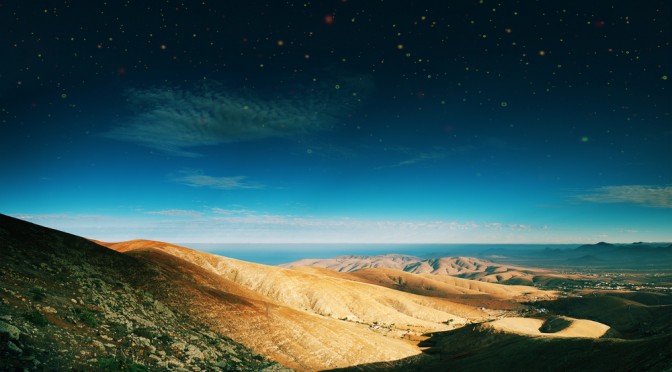 We continue in this new post on our blog telling, tourists and residents, some curiosities on the island of Fuerteventura.

FUERTEVENTURA, THE ELDEST OF THE CANARY ISLANDS
Fuerteventura is the eldest of the Canary Islands. It originated, like the rest of the Canaries, through marine volcanic processes, which began to surface about 22 million years ago, and it is uncommon to find volcanic islands over 6 million years old, so it is a true challenge of nature.
The last volcanic eruption on the island was about 10.000 years ago, and it was the one that formed the Volcano of La Arena, in the municipality of La Oliva, with a magnificent landscape, known as “Malpaís de La Arena”.

MAXORATA AND JANDÍA
Fuerteventura was originally made up of two separate islands, separated by a sandy isthmus that, after several volcanic episodes, grew and lformed a single island. However, throughout history these two parts continued somewhat divided. When conquerors arrived in Fuerteventura, called Erbania then, the island was divided into two kingdoms: Maxorata (north) and Jandía (south), each ruled by a warrior: Guize in the north and Ayoze in the south. When the conquerors arrived, these great warriors finally laid down their arms and surrendered, along with their men, the island becoming part of the Crown of Castile in 1476. The first capital of the island, Betancuria, is then set (up to XIX century), after the Norman conqueror Jean de Bethencourt.

THE ADJECTIVE “MAJORERO”
At the time of the conquest (XV C.), the word “Maho” was used to refer to the Amazigh people who were on the island of Fuerteventura and Lanzarote when the conquerors arrived. There are two hypotheses of the etymology of the term: first it was thought to come from the Amazigh word “Mahu” which means “to skin, that is, to remove the skin” in relation to a type of footwear made of the skin that was used at the time. Another hypothesis, perhaps best known, assures that it comes from the word Maxorata, the Amazigh “Mahâr-at”, which means sons of the country, and that was the name that was given to what is now the northern part of Fuerteventura, to the isthmus of “La Pared”. Later on, “majorero” began to be used exclusively to refer to the people born in Fuerteventura.

“CANARY BEACH”
Its nearly 80kms of beaches turn this island into the best prepared for bathing and for water sports of all the Canary Islands. Many people from the rest of the islands come to Fuerteventura in summer to spend their holidays, due to the charm of its beaches.

BIOSPHERE RESERVE
All the territory of Fuerteventura has been declared Biosphere Reserve since May 2009 due to its wild nature.
Despite its arid nature, this island has a rich biodiversity and is the largest representation of steppe and desert habitats in the whole archipelago, and also in the European Union, being a perfect Geo-paleontological observatory (50 sites with fossil records).
Its marine environment is undoubtedly the richest in the Canary Islands.

STARLIGHT RESERVE
On July 31st2015, the sky of Fuerteventura was definitely acredited with a certificate for the quality of its skies, becoming the third Starlight Reserve in the Canary Islands, with Tenerife and La Palma, out of the 7 existing throughout the world: Sierra Morena and Sierra Sur de Jaén (Andalusia), Montsec (Catalonia), National Park Fray Jorge (Chile)and Acadian Skies and Mi’kmaq Lands (Canada).
With this certificate, Fuerteventura is committed to protecting the quality of their night sky, also associated with cultural, scientific, astronomical, or natural values.

FUERTEVENTURA: SEA TURTLES NEST
The coast of Fuerteventura, especially the Jandía peninsula in the south, is one of the favorite places in the world for sea turtles to nest and breed. Out of the 8 species of turtles in the world, 4 of them frequent the “majorera” coasts.

COFETE BEACH: BACKGROUND OF FAMOUS FILM SHOOTINGS
Cofete beach in the municipality of Pájara, has been chosen as setting for Hollywood blockbusters, including “The Planet of the Apes” (1968) and, more recently, the movie “Exodus” (2014), all because of its spectacular landscape.

LIGHTHOUSES IN FUERTEVENTURA
The island of Fuerteventura has 4 lighthouses: one in Cotillo, another one on the island of Lobos, one in “Punta de Jandia” and one of special beauty, the one on “La Entallada”, built on a cliff.