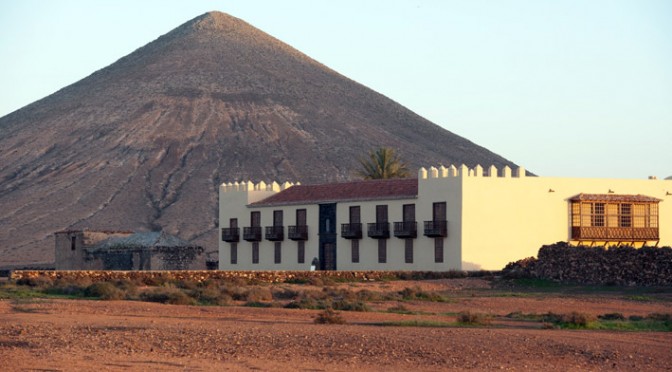 One of the most interesting and emblematic buildings in Fuerteventura, with a great historical meaning as much for this majorera island as for the whole Canary Archipelago, is the colonels’ house; a feudal building, located in the malpaís of ‘La Arena’, in the outskirts of La Oliva, standing out not just because of its history but because of its architecture too.

It is a civic and military building that started to be built in the second half of the XVII Century, ruled by the Sánchez-Dumpiérrez family, and it surprises us because of its great dimensions, making a contrast with the desert landscape and the plains where it is located. The Sánchez-Dumpiérrez Family held repeatedly the office of Colonel of the Provincial Militias, which was held for life and it was hereditary. They created a military aristocracy extremely mighty, and they would dominate the island at the end of the XVIII century.

Why does the figure of the colonel have so much power in comparison to that of feudal lords?
Once that Fuerteventura takes part in the Catillian Crown dominions are established, and the family Arias de Saavedra held the title of Fuerteventura’s lords. The crown is aware that their power to control their own territories is weakening, as the lands are under the rule of lords that govern their own way. So, the crown decides to create a military regiment under the rule of a colonel that would take control of the island little by little. In 1708 the militia’s regiment is settled, and their colonel holds the office and duties of ‘Governador de Armas’; the mission of this office will be to undermine the power of the island’s lords.

First of all they take away their military power, and little by little colonels become the true landowners, ruling the island from their fortress houses: the colonels’ house. Fuerteventura’s lords lived in Betancuria, but colonels settle in La Oliva, so Betancuria loses interest, and political, economic and social development starts in La Oliva, living at that time its biggest splendour.

La Oliva becomes thus the most important major city in Fuerteventura; the colonel orders the building of La Oliva’s church (the biggest one in the island) and creates and important market; the first colonel even buys the sculpture of the ‘Virgen de la Candelaria’, thus undermining that of the ‘Virgen de Betancuria’. They became the richest family in the Canary Islands. The power the colonels got was so great that they started to live as proper lords- there was a splendorous social and artistic refinement. Among the payslips found in the house there was that of a pianist brought from France, which shows the refinement and artistic sensitivity they had. Painters of a great reputation went to this house and gave expression to portraits of La Oliva’s colonels.

The architectural complex of the Colonels’ house clearly shows the power that this family enjoyed. It is a building inspired in the rustic houses of nobility in the Canary Islands (like those that at that time were built in Tenerife’s Lagoon, but improved). It was made of several areas or buildings, each one with a different function: the main square, the cistern, the stables, the ceremony area, the agricultural area…. Within this complex you also find the doctor’s house, the chemistry, the administrator’s area, the carpenter’s workshop, the blacksmith’s… and in the central area, as a powerful castle, the building where the colonel and his family lived. Colonels get their full splendor in the XVIII C, but all through the XIX C. the new economic, political and social situations bring the military power in Fuerteventura to a slow deterioration.

Populations like Puerto de Cabras and Antigua gain importance as demographic segments. Colonels will lose their political and military power, not the economic one though, which they will keep even after the colonles’ office disappeared.

Nowadays The Colonels’ house is a museum that hints at the power that Fuerteventura held in the past.