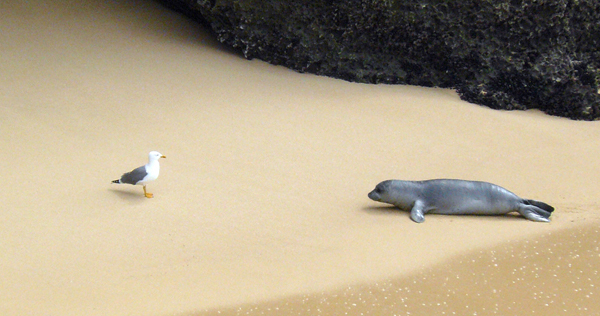 As many of you know, one of the greatest attractions of our boat trips from Corralejo is the visit to our neighbour islet of Lobos.

The islet of Lobos was named like this after a colony where a great deal of monk seals from the Mediterranean (Monachus monachus),also known as sea lions or sea cows, lived and nowadays they have completely disappeared from our coasts.

The quality and marine biodiversity in these waters, together with the loneliness and isolation they enjoyed in that environment turned the islet of Lobos into an excellent retreat for the development of this species, which came to gather thousands of specimens.

When the conquest of this island began to take place these animals were chased by the conquerors, who coveted their fur, grease and meat, causing the extinction of this species in our coasts in the Middle Ages.

Description
The Monk Seal from the Mediterranean Sea is a pinniped mammal, from the family Phocidae, and it’s one of the most weird species that exist. In ancient times it inhabited the whole Mediterranean Sea and the Atlantic in the North of Africa, reaching Madeira, The Canary Islands, Cape Verde and its remains date back to 12-14 thousand years.

The name of the monk seal has two different interpretations: on the one hand it makes reference to the isolated character of this species, as it inhabits coast areas which are difficult to reach and far away from the human beings —just like the monks, who retrieved themselves in secluded monasteries— and on the other hand, the wrinkles around its neck look like the shawl that Franciscan monks wear on their shoulders.

It has a strong body, with rounded head and short limbs in the shape of flippers. The usual size of males is around 300cm long, and they weigh around 350kg, while the females are around 290 cm long and weigh around 300kg. The fur covering their whole body is short and either grey or dark brown (white on their belly)

Habitat and distribution
This species usually looks for shelter in sea caves, although in the past, when there were large settlements, they also were on sand beaches. We can easily imagine them sunbathing on the beach of La Concha in the islet of Lobos.

In ancient times they spread, as we have already said, all over the Mediterranean, mainly in Spain (Baleares, Cataluña, Alicante, Murcia, Almería and The Canary Islands), but little by little, The man, the fishermen’s greed, who could see their fish shoals threatened, and the boom of tourism took this species to more and more hidden areas, and nowadays, as Spanish specimens, the only ones left are in Chafarinas Islands (Spanish colony in the Alboran Sea, to the west of Melilla).

In the rest of The Mediterranean and the Atlantic the number of these specimens has deeply declined to worrying figures, 500 specimens in the whole world, so this is one of the most endangered species in the whole planet.

Breeding
The colonies of Monk seals are led by large male adults. They usually breed in hidden caves not to be disturbed during the ten-month pregnancy, giving birth to just one seal pup that depends entirely on her for three months.

Food and habits
They live an average of 20 years, reaching their sexual maturity when they are 4. They live peacefully in herds and they don’t usually go far away from the coast but to forage for food. They eat fish and molluscs, mainly during the night. Their habit to look for food in the fishermen’s nets has turned fishermen into their enemies, and they have been chasing seals for years, which is the main reason for their having become now an endangered species.

Present Distribution
At present the biggest colony of Monk seals, discovered in 1945, is found in the Cabo Blanco Peninsula (boundary between Mauritania and Western Sahara), with 250 specimens out of the 500 in the whole world, which makes the situation even more dangerous for this species in case the area were affected by any anomalies that could end with a great deal of them being located in the same area (for example, being attacked by toxins, as it already happened in 1977). There is another colony in Madeira.

The reasons we have mentioned above make the extinction of this species an imminent event which several projects of recovery are trying to stop.

In our next article we will talk about projects of reintroduction, promoted by the General Direction of Nature Conservation in the Ministry of Environment and the Regional Environment Vice-Ministry from the Canary Islands, which is trying to reintroduce this species in the Spanish fauna through The Island.