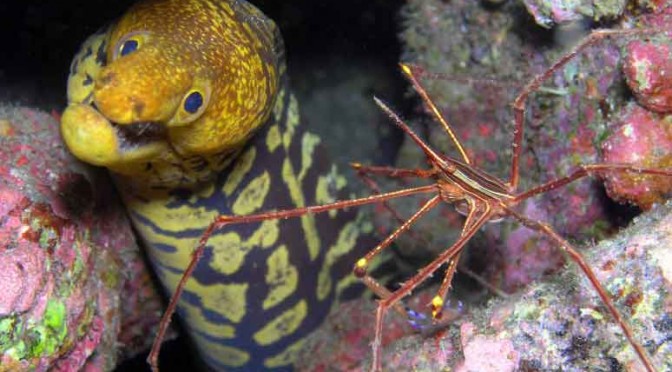 They are voracious predators of fish, cephalopods and crustaceans, which usually remain hidden in crevices, stalking prey, and usually they only  leave their den at night to hunt.

Morphology
They can be up to five feet long, and weigh 2 to 10kg.
They usually breed between May and October, with a peak set in August.
They have a dorsal fin along the whole body which joins ends with the tail fin. They don’t usually have pectoral and pelvic fins.
One feature of this family is its strong and double jaw (internal and external, “allien” type), whose shape  allows them to catch prey and swallow it without using its limbs.
Their main predators are other  morays and groupers.
They have small eyes and very underdeveloped sight, so they’re usually very suspicious fish which immediately launch attacks with their mouth to defend themselves, and though their bite isn’t usually poisonous, it’s very painful. They also have very small gills, so they often need to open their mouth wide to breathe.
Their skin does not have scales, but a mucous membrane which is toxic in  some species, and they have an irregular colouration to help them  camouflage.

Fishing murays
Fishing murays follows an ancient technique that mixes ritual with work. Fishermen often attract them with some songs that numb them, like siren songs. They are repetitive tunes, which vary from one island to another, but  they often say things like: “Jo, little Moray … Jooo”, “Come little Moray , Goldentail Moray,  the male is coming to eat your litter” and other typical verses accompanied by loud whistles and a pretty effusive intonation. The old moray fishermen  believe that without this technique it would be impossible to catch these animals, as their strong jaws destroy any fishing hook.
These work songs, whose records date back to the sixteenth century, and  which are said to have their origin in the ancient Greece, have been incorporated into the musical heritage of the Canary Islands, thanks to musical groups like “Los Sabandeños  who sing “El pescador de Morenas” or a group of Canarian artists” Artenara” with their song ” El Canto de la Morena “.
Along with these songs, the fisherman also uses a hollow reed, inside which there is a wire ending in a noose, with a piece of squid attached as bait. The moray, stunned by repetitive songs, guard down and leaves its den in search of the piece of octopus.

Gastronomy
The moray is a delicacy for many palates, thanks to the excellent quality of its meat. The coast moray tends to have fewer bones and be more tasty than the deep water moray, which has more fat. As gastronomic anecdote, moray eels were highly valued in the Roman Empire, where the most special celebrations used to serve a menu with morays. The species was bred in a kind of  fish farms, and it’s said that Romans often gave them the slaves’ flesh as food, as they said that the flavour of  the morays fed with human flesh was delicious. Hence the phrase “sentenced to morays.”

Species
Among the species of Morays we have in the Canary Islands are:

Black Moray (Muraena Augusti)
It is the most abundant and is endemic to these islands and also to  Madeira and Azores.
It can be up to 1m long, and  it’s usually found  within 100m deep.
Its body is spindle-shaped and in the distance it may seem black or bluish gray, but if you look closely you can clearly see its white spots.
It prefers rocky bottoms, with caves and hollows to shelter during the day.

Mediterranean Moray (Muraena helena)
This species is the largest one, reaching five feet long, and it’s usually found on the eastern islands, dwelling, like the black Moray, in rocky bottoms. Its bite is poisonous, due to the haemophilus secretion of its palatal mucosa.

Fangtooth Moray (Enchelycore anatina)
Although not as plentiful as the black Moray, we can also see it in rocky areas. It differs clearly because of its yellow head and its body patterns. It is a little smaller and it can reach up to 60cms.

Goldentail Moray (Gymnothorax miliaris)
This species is often mistaken with the Fangtooth Moray, but its head is more rounded and its body patterns are more marked. It is one of the most elusive and rare to see moray eels, as it is very shy. El Hierro is the island where it is most frequently seen. It is a poorly studied species.