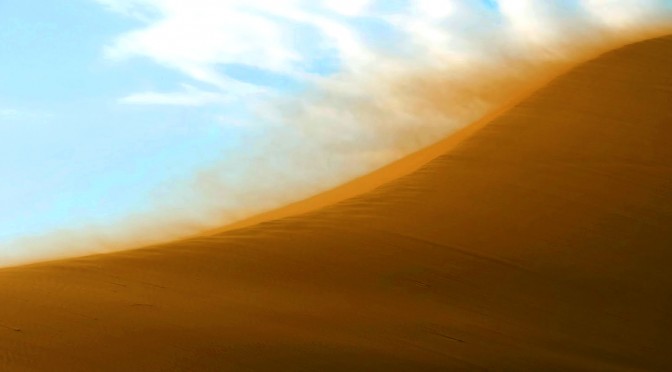 Fuerteventura, the quiet and apparently unchangeable island, has the characteristic stillness of the dry lands. A space of silent where time seems to stop to capture a landscape which is like a picture that one would like to scan.

Its heavenly beaches invite to relax and observe, to long days of sand and sun bathed in turquoise waters.

But so that our sunbathing days are completely satisfactory we have to know and have one of the elements that best define the island on our side: the wind.

Few are the travellers who have visited Fuerteventura without knowing it, who haven’t had their cap blown away on the beach, that haven’t been beaten by the sand on their calves or haven’t looked for shelter from the wind in the “corralitos” of majorera beaches.

Many of their visitors come just looking for those air blasts so as to practise their favourite sports, like windsurf or kitesurf, or just to fly their kites and dye the sky with colours (in ancient times the wind provided a way of earning a living for many families, as it activated the windmills that ground grain); However, for those looking for peace and quiet we’ll suggest some beaches and advice so that their experience in Fuerteventura be unforgettable, even with wind.

The first thing to bear in mind is the wind direction. When the wind comes from the East it is more advisable to visit beaches on the West, and the other way around.

Wind barriers are also important, that is, looking for beaches which are sheltered from the wind direction by some barriers, either natural or built. So, for example in the Western coast we find impressive beaches at the mouths of ravines, which are usually beaches sheltered by high cliffs which stop the winds when they aren’t west winds.

They are usually beaches which are difficult to access, which require a bit of skill to reach them (we recommend lots of caution when going down), but once you get there they promise heavenly beach days. You can find this kind of beaches in the North (near El Cotillo) as well as in the South, like “Playa de los Ojos” in Jandia.

In the Western coastline, for example Corralejo area, the beaches are protected from West winds thanks to the barrier that the town itself provides. The same happens in the South with the beaches at “avenida marítima” in Morro Jable.

A very recommended area in the island is the one oriented towards the south, in Península de Jandia, where we find quiet water coves sheltered from North winds going in a Westerly or Easterly direction, and also sheltered from heavy swells. Among these coves we find Playa Juan Gómez, known by most of its visitors as one of the best beaches in Spain. And in the rest of the beaches in our wonderful coastline, although without barriers that protect them from the winds, we always find these “corralitos”, so characteristic of Fuerteventura’s landscape. They are circular stone constructions, approximately one metre high, which can have different sizes: for a single person, couples or even for whole families. If you get to a beach beaten by the wind and you find one of these constructions don’t hesitate to settle in it. You’ll be able to watch this paradise from the peace and quiet, no matter how strongly the wind outside the walls in your shelter may blow.