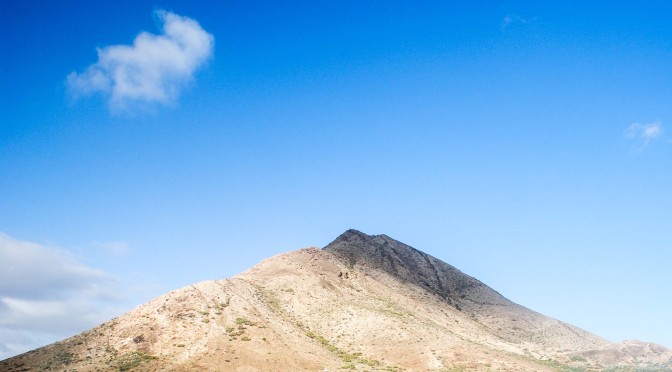 They are several the natural monuments in Fuerteventura —Isla de Lobos is one of them, this is why we enjoy taking tourists to such a setting in our daily excursions— ; one of them, and which we consider a place where memory and magic find shelter is Tindaya Mountain. To the ancient inhabitants of the island (Los Mahos) this is a Sacred Mountain, one of the most important natural monuments in The Canary Islands.  Located 4 kms from the coast, in the ravine of Esquinzo, in the village of Tindaya (municipality of La Oliva), this mountain, 400m above sea level, is a spectacular trachyta python that erosion, over time, has exposed as the volcano that wrapped it wore down and showed it. The trachyte is a hard and rough volcanic rock that once was used to make millstones and is now a highly valued ornamental stone used for building and once polished it recalls marble. Geomorphologically, its study is essential to understand the formation of The Canary Islands. Tindaya has very important cultural, historical and ecological values. Popularly known as the Witches’ mountain, it contains nearly 300 “podomorfos” footprints (foot-shaped engravings), which turn the mountain into one of the largest engraving sites in the planet, similar to those found in North Africa.

“Los podomorfos” in Tindaya Mountain
These foot-shaped engravings were made by different hands at different times, as there are several kinds, in size, execution and distribution. They are spread over more than fifty panels grouped in its upper section and almost thirty loose figures, missing today. We do not know much about these “podomorfos”, all of them oriented towards the sunset, the west; some believe this is because from the top of this mountain, on clear days, you can see Teide Mountain, which ancient inhabitants considered to be Satan’s residence and it might be the target of their rituals, although there are other more plausible theories which relate these footprints with astrological phenomena and Summer and Winter solstices. Other theories speak of nuptial rites … What is undeniable is that this mountain was a ritual site for ancient inhabitants and, therefore, a sacred mountain.

Aboriginal villages
At the foot of this mountain 3 permanent settlements with aboriginal remains have been found, research issues still open, remains of cabins or homes, polished shells and carefully crafted pottery, which seems to belong to rituals rather than to household goods. The oral history or Tindaya tells that games, dances and magical-religious rituals, linked to the stars and supernatural forces, were held there.

Plant and animal species shelter.
The sacred mountain of Tindaya is also shelter for endemic species, many of them unique to Fuerteventura and some, endangered. We’ll highlight “La Chumberilla de Lobos” or “Cernúa” (Caralluma Burchardii). It also serves as a shelter for animals, many of them species in clear decline, classified as rare and uncommon now, as it is the case of the Canary Island Stonechat and the Trumpeter Finch.

Natural Area of ​​National Interest.
For all these values, this area was declared, by 12/1987 Law, of June 19th , on Declaration of Canary Island Natural Areas, as “Paraje Natural de Interés Nacional de Montaña Tindaya” and reclassified as natural monument by 12/1994 Law, of December 19th, on Natural Areas of the Canary Islands.

Climbing this mountain is now banned but you can stroll around to feel its majesty, also visible from different areas in northern Fuerteventura and recognizable for its special rock, different from other mountains or volcanoes on the island. They are already several the recommendations of must spots to visit and discover in this island; our favourite one will always be the tour around Isla de Lobos in one of our daily excursions from Corralejo; it is so recommendable that we are number one on TripAdvisor so, will you miss it?
FuerteCharter Team